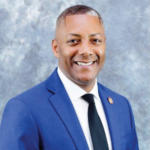 Washington, D.C. – The American Public Transportation Association (APTA) has announced the newest member of the senior leadership team. Effective today, John Henry will become APTA’s chief financial officer. “We are pleased that John Henry will be joining APTA to lead our finance and information technology departments,” said APTA President and CEO Paul P. Skoutelas. “His wide-ranging experience and expertise in finance in both the public and private sector will serve APTA and its members well and we are excited to have him join the APTA team.”

Henry most recently served as the chief financial officer for the Jefferson County Commission in Jefferson County, Alabama. In that role, he was responsible for general accounting, budget management, purchasing, revenue and economic /workforce development. Henry was recently recognized as CFO of the Year by the Birmingham Business Journal.

Prior to joining Jefferson County, he served as Associate Treasurer for asset management in the Office of Finance and Treasury (OFT) for the District of Columbia managing the District’s investment programs, including the general fund, the Districts 401(a) and 457(b) retirement programs, the 529 College Savings program and the District’s Other Post Employment Benefit’s Fund.
Henry is a certified public accountant and holds the Certified Treasury Professional designation. He earned, with honors, a master’s in business administration, finance, from Howard University and a bachelor’s with honors in accounting from Virginia State University.