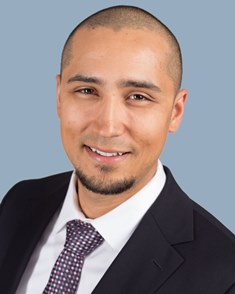 Eloy is originally from Oceanside, CA where he lived through high school graduation. Shortly after, he moved to San Diego and started his college studies at Mesa Community College where he prepared to transfer to university to study engineering. Eloy was accepted to the University of California San Diego (Go Tritons!) in 2008 to the Mechanical Engineering program. During his time at UCSD, Eloy stayed active in the Triton Engineering Student Council, primarily with the outreach committee. He was accepted to the McNair Research program as well as the Brown University Research Program during his student tenure, which helped prepare him as a prospective Ph.D. candidate for graduate schools. Eloy was accepted to Virginia Tech’s Railway Technologies Laboratory as a direct Ph.D. student where he studied the capabilities of Doppler LIDAR as a multi-functional measurement tool in railroad survey operations. During his candidacy, Eloy carried out co-ops at two rail engineering firms, Norfolk Southern Research & Tests and Amsted Rail – Brenco. Eloy continued his involvement in student bodies such as a Graduate Student Assembly liaison to the Queer Grads, Professionals, and Allies Committee. Eloy graduated with his Ph.D. in Mechanical Engineering in December of 2015. In January of 2016, Eloy started as an engineering consultant at LTK Engineering Services in Ambler, PA. LTK is a consulting firm for the railroad, primarily serving passenger systems. As of 2018, he is still with LTK based in San Mateo, CA providing engineering support for Caltrain’s procurement of electric vehicles for future electrified service on California’s peninsula commuter line.

Eloy’s hobbies typically involve a form of athletic activity. He played soccer for a number of years as a kid as well as for recreational leagues in San Diego and Blacksburg (VA Tech) during his college years. During high school, Eloy played tennis for Oceanside High and ran track at Fallbrook High where he spent his senior year. At Virginia Tech he joined the crew team and rowed for the university for two years. During his co-op at Brenco, Eloy’s boss introduced him to triathlon, a sport to which Eloy is heavily committed to this day. Eloy has competed in a number of triathlons and is looking forward to opportunities to race in the San Francisco Bay Area. Personal Interest

Eloy’s interest in physical fitness training brought him to pursue and obtain his personal training certification which he uses today as a bootcamp instructor. His workout group, Open Urban Training (“OUT”), is aimed at strengthening the health and fitness component in the LGBTQIA community. Not wanting finances to get in the way of someone pursuing fitness goals, OUT is a free group open to all fitness levels. Optional donations are accepted during times of fundraising for OUT’s involvement in LGBTQ+ efforts and community involvement. Eloy started the group in Philadelphia where it ran for almost three years and will carry it over to San Francisco where he hopes to find the same success as a community-building program.