Chairman Lipinski, Ranking Member Crawford, and Members of the Subcommittee on Railroads, Pipelines, and Hazardous Materials, on behalf of the American Public Transportation Association (APTA) and its 1,500 public- and private-sector member organizations, thank you for the opportunity to submit testimony for the record on “Tracking Toward Zero: Improving Grade Crossing Safety and Addressing Community Concerns.”

My name is Paul Skoutelas, and I am the President and Chief Executive Officer (CEO) of APTA, an international association representing a $71 billion industry that employs 430,000 people and supports millions of private-sector jobs. We are the only association in North America that represents all modes of public transportation—bus, paratransit, light rail, commuter rail, subways, waterborne services, and high-performance intercity passenger rail.[1]

Public transportation not only spurs economic growth, but reduces congestion, improves air quality, saves time and money, and advances an equitable and better quality of life for our communities.

Nearly 40 years ago, Congress enacted the Northeast Rail Services Act of 1981(P.L. 97-35) to salvage commuter rail operations from Conrail and created six commuter rail authorities.[2] The state of commuter rail at that time suffered from low and declining ridership and equipment long beyond its useful life. These agencies and the many others across the nation that existed then or have started anew have transformed commuter rail into an essential, reliable, growing, safe, and affordable mobility option carrying hundreds of millions of travelers each year.

Today, commuter rail is a $9.9 billion industry, creating and supporting more than 200,000 public- and private-sector jobs. Moreover, the overwhelming majority (63 percent) of this funding flows to the private sector.

Today, there are 32 agencies operating commuter railroads.[3] Commuter rail services are higher-speed, higher capacity trains with less frequent stops. They are traditionally used to connect people from suburban areas to city centers. In the last decade, nine new commuter rail systems[4] have begun operation, with the latest—TexRail in Fort Worth, Texas—starting up last year. 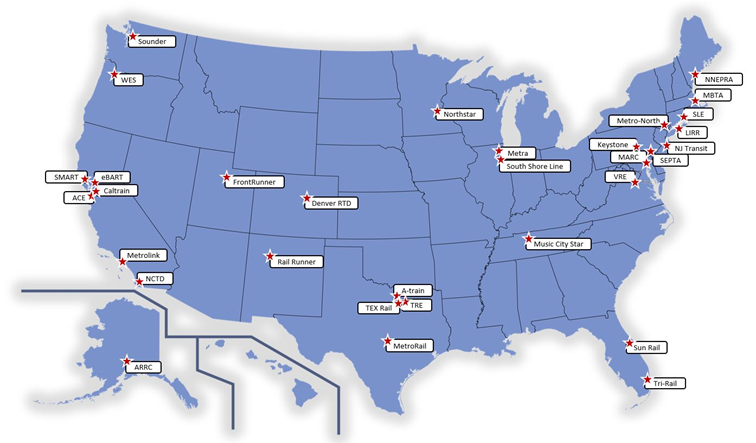 Safety is a Core Value

As a result of this overriding and sustained commitment to safety, public transportation is the safest form of surface transportation. Every year, 32 commuter railroads across America safely carry passengers on more than 500 million trips. And, traveling by commuter and intercity passenger rail is 18 times safer than traveling by car. 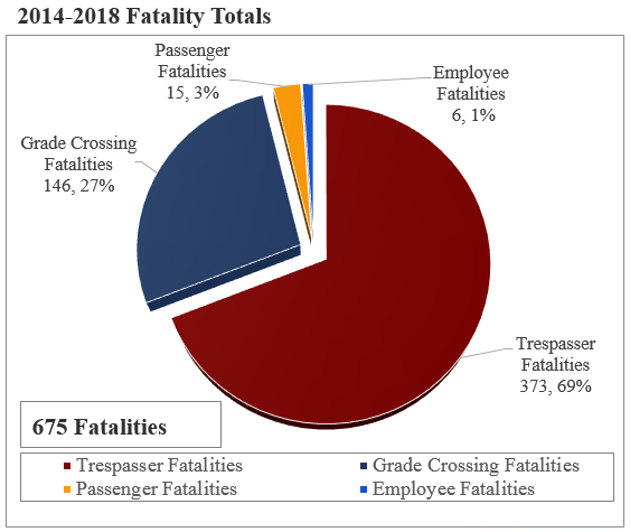 Our commuter railroads have been working hard to mitigate these grade-crossing incidents, often involving unlawful entry to the railroad’s right of way. These incidents cost lives, cause serious injuries and property losses, and result in delays to the traveling public. To address highway-rail grade-crossing hazards, commuter rail agencies are using myriad treatments and technologies, including creating pedestrian crossings, constructing corridor fencing, installing delineators, and placing cameras at crossings and in railcars. Engineered solutions are very expensive to construct. According to a recent Government Accountability Office (GAO) report,[5] 2016 Department of Transportation data show that separating a grade crossing from traffic can cost between $5 million and $40 million, while installing four quadrant gates to grade crossings with flashing lights can cost between $250,000 to $500,000.

Private-sector mapping technology is also critical to combating this significant safety issue. For example, the Metropolitan Transportation Authority’s Long Island Rail Road (LIRR) and Metro-North have partnered with Waze to integrate a railroad crossing warning into its GPS application. The application warns drivers that they are approaching a grade crossing and not to turn onto the tracks. LIRR and Metro-North automated a feed to ensure the hazard alerts are always maintained in the Waze application. In conjunction with the Waze implementation, LIRR installed delineators and road markings at its more than 290,000 grade crossings. As a result, LIRR experienced an immediate and remarkable reduction in events significantly enhancing its safety and operations. SEPTA also partners with Waze and provides the company with a table of its grade-crossing locations. Using this table, Waze updates the information daily for six months. After the six-month period is up, SEPTA re-sends Waze the grade-crossing file.

APTA is encouraged by these individual partnerships with technology companies and welcomes other map navigation developers to work with our industry to add automatic notifications of railroad grade crossings to their maps. There are too many senseless incidents and deaths because cars do not stop at grade crossings or bypass the gates. Navigation developers have created powerful tools for helping us find our way and drive more safely. With their support, we can provide an important tool to warn drivers and prevent needless accidents and deaths.

APTA urges Congress to authorize a total of $1.5 billion over six years ($225 million per year) under the CRISI program to provide grants to commuter rail and operators in high-ridership corridors for highway-rail grade-crossing safety initiatives.

Commuter railroads are also addressing the long-standing, critical issue of trespassing on railroad tracks. APTA’s most recent analysis of commuter rail data over the last five years indicate that trespassing remains a major contributing factor to railroad fatalities—nearly 70 percent of rail-related fatalities were as a result of trespassing. Causal factors for trespassing-related fatalities include suicide, direct-route crossing, and general distraction.[6] Trespassing issues are complex. Our commuter railroads have partnered with their local communities, mental health care providers, law enforcement, and national organizations to launch educational campaigns about the dangers of trespassing and to develop ways to mitigate these incidents.

For example, in 2016, Metro-North launched a rail education and community outreach program designed to reduce grade-crossing incidents. Its safety outreach program, Together Railroads And Communities Keeping Safe (TRACKS), was developed in response to a 2015 grade-crossing incident in which six people were killed. One focus of the TRACKS program is to educate the younger members of the Metro-North community with presentations specifically targeted to children using a character called Metro-Man. Since its launch, TRACKS has reached nearly 345,000 people in the Metro-North service area and Metro-North reports a decrease in trespasser strikes of 14 percent in 2019.[7]

APTA and its commuter rail members will continue to be leading advocates to improve railroad and public safety. We urge Congress to do its part by providing the funding that is needed to assist commuter rail in making these important safety investments. In addition, we urge Congress to ensure that the rail statutes and regulations, which are often very prescriptive, do not prevent railroads from introducing new technologies to make our railroads safer.

APTA strongly urges the Committee to invest $145 billion over six years in public transportation and fund critical projects that will repair, maintain, and improve our public transit systems (including commuter rail) today and in the future. Our proposal, which includes $112 billion for Urbanized Area Formula, State of Good Repair, and CIG grants, would address the entire state-of-good-repair backlog and fund all CIG projects in the pipeline in the next six years.

Together with this increased funding, APTA recommends that the Committee conduct a zero-based review of the CIG program to assess all statutory, regulatory, and other administrative requirements. We have previously testified that the bureaucratic maze that project sponsors, including commuter railroads, must adhere to is costly and burdensome.

Finally, APTA calls on the Committee to create a Passenger Rail Trust Fund funded in part with new, long-term, dedicated revenues to significantly increase passenger rail investment to $32 billion over six years. This investment would include $7.1 billion for CRISI grants.

More investment is needed to ensure that commuter rail agencies can pay for important safety initiatives, including mitigating grade-crossing incidents and funding the operation and maintenance costs of positive train control (PTC). APTA urges the Committee to expand the eligibility of the CRISI grant program to commuter rail to provide specific funding for:

On behalf of APTA, thank you for giving us the opportunity to submit testimony for the record on “Tracking Toward Zero: Improving Grade Crossing Safety and Addressing Community Concerns”. We look forward to working with the Committee on Transportation and Infrastructure as it writes the next Surface Transportation Authorization Act. It is imperative that we make meaningful investments in commuter rail to enable these critical services to continue to remain safe, grow, serve our communities, and contribute to the national economy.

[3] A list of commuter railroad agencies can be found in Appendix A. APTA’s list includes all commuter and hybrid rail agencies that receive funding from the Federal Transit Administration (FTA) and report data to the National Transit Database.

[7] LIRR launched its TRACKS program in 1988 as a result of the deaths of nine teenagers whose van was hit by a train after driving around activated crossing gates. In partnership with the MTA Police Department, the program reaches over 100,000 participants annually. Training is provided to audiences from preschool through adults in schools, community settings, and businesses.