To help low-income residents travel to and from work when bus service is not available, the public transportation authority of Pinellas County, Florida, created the TD Late Shift program with private partners Uber and United Taxi, and Care Ride (wheelchair provider). Launched in 2016, the program provides fully-subsidized ride hail and taxi trips to or from a place of work during nighttime hours. The program has been very popular with riders, and PSTA has continued it for three years. PSTA is currently exploring ways to extend it to serve additional Pinellas County residents.

Pinellas Suncoast Transit Authority (PSTA) is the public transportation provider for Pinellas County, Florida, with an urbanized population of over 900,000. In 2017, it provided 12.4 million trips on bus and paratransit services.

If a Pinellas County resident makes less than 150 percent of federal poverty guidelines and lacks regular access to a vehicle, he or she can apply to be part of PSTA’s Transportation Disadvantaged program (TD), offering an $11 monthly bus pass (a discount of more than 80% off the regular price).

In February 2016, PSTA launched its first partnership with a ride hail service, a program called Direct Connect. The program is a first-mile, last-mile partnership with Uber and United Taxi that provides up to $5 off a ride hail trip that is going to or from a designated PSTA bus stop between 6 a.m. and 11 p.m.

PSTA bus service on many routes ends between 7 and 9 p.m., with very limited service available later than that. That creates a problem for Pinellas County residents who have a job—or are seeking a job—that requires commuting at night or in the early morning, such as restaurant workers or security guards. Many of these residents have low incomes that qualify them for PSTA’s TD program. But with no public transit service available at night, commuters must rely on friends or family with a vehicle (if they have one) or relatively expensive ride hail or taxi service or walk/bike to or from work in the middle of the night. The lack of affordable transportation options is a burden for limited-income residents who have a nighttime job and a barrier to employment for those seeking one.

PSTA launched the TD Late Shift program in August. 2016 to provide no-cost transportation to low income passengers commuting to or from work at night. Participating residents can take up to 25 free trips to or from work in a month. Each ride must occur between 10:00 p.m. and 6:00 a.m. and must begin and end within Pinellas County.

Ninety percent of the program’s funding (around $500,000 per year) comes from the statewide Florida Commission for the Transportation Disadvantaged, with PSTA providing a 10 percent local match. 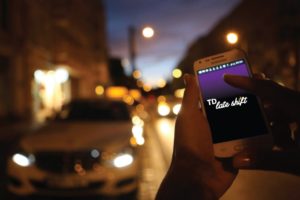 Any private mobility provider can be a part of TD Late Shift by entering into a contract with PSTA. United Taxi, a local taxi service, Care Ride, a local wheelchair provider, and Uber all signed up in 2016 and continue to provide service in partnership with the city. The cost of participating in TD Late Shift is $9/month for a qualifying Pinellas County resident, which is added to the $11/month cost of the monthly TD bus pass. According to Uber, the average cost of a trip within Pinellas County at night is between $11 and $16, meaning that the monthly value of the 25 free trips could be more than $300.

To participate in TD Late Shift, a Pinellas County resident must first be part of the TD program, which verifies income- and residence-based eligibility. Once approved for TD Late Shift, a commuter must choose whether to use United Taxi or Uber for his or her commutes. Each company reports rides to PSTA regularly for reimbursement, with the agency kicking out any participant who abuses the rules (i.e., taking a trip outside of Pinellas County or to and from locations that are clearly not work-related).

PSTA evaluates the success of the program by the number of participating residents. Because the agency verifies that every participant in TD Late Shift has a limited income and does not have reliable access to a personal vehicle, the agency assumes that most participants would not be able to hold a nighttime job in the absence of the program. 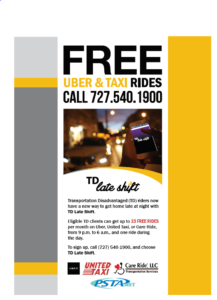 TD Late Shift has been very popular with residents. Up to 400 people use the program per month, with an average of around 14 monthly trips per person in September 2018. The program provided as many as 4,730 trips in April 2018 but had to be scaled back due to budget limitations. Participants cycle through the program regularly (for instance, because they get a daytime job or move out of the county), so expenses can be reduced through attrition.

In 2017, the agency stopped accepting new applications for TD Late Shift due to budget limitations, but as of December 2018 it has begun to admit new participants again. The agency is currently seeking additional funding to expand it further.

The TD Late Shift program has been popular in Pinellas County, and PSTA encourages other transit agencies to explore similar initiatives to serve late-night commuters of limited means. “TD Late Shift has been really popular and we have lots of people calling in because they heard about it from a friend or coworker, asking to participate,” said Bonnie Epstein, senior planner at PSTA.

From a program management perspective, Uber was at first unwilling to share origin and destination information for TD Late Shift trips with PSTA, which prevented the agency from validating that passengers were using the program to get to and from work as intended. Prompted by media inquiries, Uber began to provide the requested data (see the contract amendment below). “I wish we could have resolved that issue up front,” said Epstein.

PSTA also suggests that public transit agencies considering similar partnerships anticipate a few issues that the agency had to manage after TD Late Shift was in operation. For instance, rather than building a new system to determine program eligibility, it’s easier if a program like TD Late Shift can leverage preexisting programs – like PSTA’s TD program – that already verified participants’ residence and income. It’s also worthwhile to negotiate with private partners ex ante how they can minimize program abuse (i.e., do not allow riders to request trips outside the county or request a luxury vehicle).

David Zipper, urban and regional policy program fellow with the ¬German Marshall Fund of the United States, developed this document for APTA.

Uber’s announcement of the program