The Tri-County Metropolitan Transportation District of Oregon (TriMet), the primary public transportation provider in Portland, utilized a novel approach to build the Hop Fastpass, its public transit payment system that first launched in 2017 and has steadily added new features.

Instead of building a closed fare payment system with proprietary software and hardware, the agency chose to design the Hop Fastpass through “open architecture” that provides flexibility to adjust individual software and hardware components. Hop’s open architecture allows TriMet to capitalize on changing technologies or falling costs, avoiding negotiations with a systems integrator that could have a financial incentive to minimize (or profit from) changes to the fare payment system over time.

Hop’s open architecture allows TriMet to capitalize on changing technologies or falling costs, avoiding expensive, cumbersome negotiations with a proprietary systems integrator that is set-up to profit from changes to the fare payment system over time.

TriMet is the regional public transit agency for the Portland metro region. The agency provided 1.9 million rides per week in the first quarter of 2019 on its bus, light rail and commuter rail services. Other agencies in the region include the Portland Streetcar and C-TRAN in Vancouver, WA, a suburb just over the Oregon state line.

TriMet’s leadership decided in 2010 to transition from its paper-based fare collection system to an account-based system that could offer customers a “virtual wallet,” allowing them to pay for their trips in a variety of different ways (smartcard, contactless credit card or smartphone) and pay for rides in adjacent transit systems as well. TriMet would ultimately name this account-based system the Hop Fastpass, or “Hop.”

As TriMet considered Hop’s future design, the agency wanted to avoid the “technology lock-in” that agencies risk with traditional, closed fare payment systems. At the time, standard agency fare payment procurements invited a systems integrator to use its own proprietary designs to connect all fare payment components—including ticket vending machines, back end processing systems, farecard readers and much else. As a result, it could be difficult (and often expensive) for agencies to compel vendors to swap out a particular component for a cheaper or better technology that emerged a few years later.

Rather than develop Hop as a closed system, TriMet’s leaders sought to build it through open architecture. Tim McHugh, the agency’s chief information officer, described open architecture as the use of open, transparent standards that empower transit agencies to adopt a plug-and-play mentality for specific technologies. “There are a lot of components with fare payments,” McHugh said. “If you go from end to end with a specific vendor, you’re locked in for a very long time. We want to make sure TriMet has the ability to keep pace as technology changes.”

A significant goal of TriMet’s strategy was to avoid using a single vendor to provide all software and hardware components of Hop. Rhyan Schaub, director of fare revenue and administrative services, borrowed an analogy from the kitchen: “You can have a seamless cooking experience without all your pots and pans being from the same company. You might conclude that one company makes a better saucepan and another makes a better pot. In the same way, you can create a seamless transit payment experience with multiple vendors providing the website, vending machines, back-end system and so on.”

Public transit agencies adopting open architecture can also save money over time. If an agency wants to adjust or swap out a particular vendor or outdated technology, open Application Programming Interfaces (APIs) remove the requirement to pay for change orders. As the cost of adopting new technologies falls, transit agencies become incentivized to update their systems and components more frequently.

TriMet adopted open architecture as the guiding principle for its design of Hop, including the new system’s capacity for open payments, which would free customers from relying on a specific transit pass by allowing them to pay with a contactless credit card, debit card or smartphone wallet. To be clear, the agency could have offered open payments through a closed, proprietary back-end architecture, but using a closed system would have meant the agency would forego the flexibility provided through open architecture.

TriMet issued its RFP for a Hop systems integrator in 2013, ultimately awarding the contract to INIT. In the RFP, TriMet emphasized that the integrator would need to provide open APIs that would enable any vendor to connect easily to the overall Hop system. These APIs were the heart of Hop’s open architecture.

The RFP also established that TriMet would pay no additional fees to the systems integrator for future integrations with new technologies (i.e., no expensive “change orders”). Because the open architecture approach was so new, agency staff devoted considerable time to working with INIT and its subcontractors to ensure the Hop system reflected TriMet’s vision of openness.

The Hop Fastpass went live in July 2017, with a physical card that worked not only on TriMet vehicles but also on C-TRAN and the Portland Streetcar. For the first time, TriMet offered customers functions like autoloading and fare capping, which charges riders only for fares up to the cost of a daily or monthly pass, at which point all subsequent rides are free.

By fall 2017, Hop also offered open payments, enabling riders to pay with a payment card with an embedded contactless chip. Riders without a contactless chip-enabled card could pay with a smartphone if they had activated Apple Pay, Android Pay (now Google Pay) or Samsung Pay. However, certain benefits of a physical Hop card—like concession fares for a child or elderly adult or a monthly pass—were not yet available for customers paying with a contactless card or smartphone.

That changed in spring 2018, when TriMet allowed users of Android Pay or Samsung Pay to create a “virtual Hop card” on their phone that conferred all the benefits of a physical Hop card. As of May 2019, Apple Pay users could use a virtual card as well.

Today, riders can receive all Hop benefits—including fare capping, autoloading, monthly passes and concession fares—whether they pay by smartphone virtual card, or by a physical smart card (an option important for riders unable to afford a smartphone). Users of both physical and virtual Hop cards can add value online by visiting regional transit ticket offices, making a phone call or via mobile app. Users of physical Hop cards can also add value at more than 500 stores throughout the Portland region that are part of the Hop retail network.

There is evidence that Portlanders are capitalizing on the new payment options that Hop offers.  In May 2019, almost eight percent of Hop users paid with a virtual card, and over seven percent paid with contactless credit or debit cards (the remaining 85 percent paid with a physical Hop card).  The share paying with a virtual Hop card is expected to rise with the option of payment through Apple Pay, which launched in late May.

TriMet is just beginning to reap benefits from the flexibility that Hop’s open architecture offers. As an example, McHugh pointed to the agency’s ticket vending machines, which can when needed be lifted out and replaced with another set of ticket vending machines without TriMet paying its systems integrator to accommodate the switch. Hop’s open architecture also increases integration potential with C-TRAN and Portland Streetcar. For instance, the Portland Streetcar uses CAD AVL systems from a different vendor than TriMet, but Hop’s open APIs could support both systems simultaneously.

Hop’s capacity for plug-and-play positions TriMet to take advantage of falling costs of individual components like POS tablets and fare validators. Looking to the future, McHugh said open architecture has allowed TriMet to “future-proof” its payment system. If TriMet wants to add a new technology to replace an existing one, the agency can simply offer its open APIs to a vendor and invite them to be a part of Hop’s system.

It’s at least conceptually possible for Hop to eventually connect with private-sector mobility providers such as ridehail and e-scooters, turning Hop into a multimodal mobility wallet that can accommodate MaaS. TriMet recently rolled out a multimodal trip planner, with payment integration planned for the future. Hop’s open architecture makes this much more feasible.

One important contributor to Hop’s success was TriMet’s effort to overhaul and simplify its fare structure prior to Hop’s launch. By replacing a zone-based fare system with a flat $2.50 ticket, Hop made it easier to develop new technical solutions for transit payments.

If given the chance for a Hop do-over, TriMet leaders said they would reconsider their project schedule for developing core open APIs and the system components delivered by individual vendors. “I would have first developed the system integrator APIs and had them 75 percent complete before bringing in other parties using those APIs, like web developer, mobile app developer, etc.,” Schaub said. Because those APIs were still in flux, there were bottlenecks in completing projects.

Schaub and McHugh see the open architecture and flexibility behind Hop as a long-term strength of the system, especially in a multimodal world built around MaaS. They encourage other agencies considering fare payment overhauls to consider a similar approach. 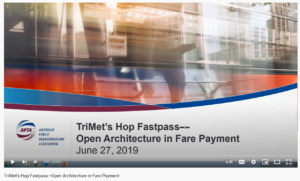