Transit as a Micromobility Manager: The Dayton RTA Experience

The Greater Dayton Regional Transit Authority (RTA) has taken a hands-on approach supporting the use of shared bikes and scooters in the last five years.  The authority has become the operator of Link, the local bikeshare system, and also the maintenance provider for Spin (owned by Ford) in its shared e-scooter deployment.  At the end of 2019, 225 bikeshare bikes were available in 27 stati

ons in Dayton, as well as about 200 Spin e-scooters.  RTA is working toward integrating these vehicles into a comprehensive “Mobility-as-a-Service” offering that would be available through a single smart phone app. 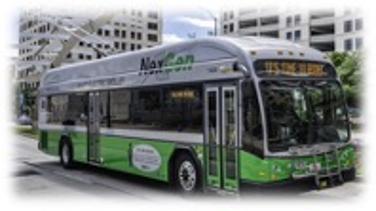 Dayton RTA is the public transportation provider in the Dayton region, including Ohio’s

“Micromobility” is a relatively recent term that refers to person-sized vehicles that have the potential to be shared, such as bikeshare, e-bikes, e-scooters, and electric skateboards.  Such vehicles have gained popularity in many urban areas in the 2010s, powered by the confluence of trends including widespread adoption of cell phones, the rapid improvement in electric batteries, and the declining rates of automobile ownership among younger urb

In the mid-2010s many cities across the United States unveiled new bikeshare systems that allow riders to pay for annual or daily access to fleets of bikes that can be docked in a network of stations.  Leaders at RTA, the City of Dayton, and Bike Miami Valley (an advocacy group) were interested

in bringing the docked bikeshare model to Dayton, where they saw potential demand downtown and at the nearby University of Dayton campus.

RTA also envisioned bikeshare as a step toward an integrated network of mobility alternatives to the automobile, with transit as its backbone. 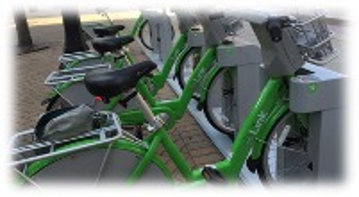 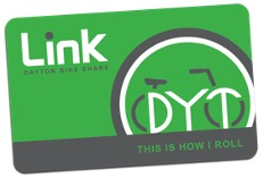 RTA partnered with the City of Dayton, Miami Valley Regional Planning Commission and Bike Miami Valley to launch Link, a docked bikeshare system, in 2015.  The city contributed $250,000 to cover capital costs for Link, which was matched by $800,000 in federal Congestion Mitigation and

Dayton residents can pay $70 for an annual membership, which provides unlimited 30-minute rides on any of the 225 bikes available in the Link system (daily and monthly memberships are also available).

Members unlock a Link bike with their smart card or with a smartphone app.  In 2019 Link provided approximately 30,000 trips. 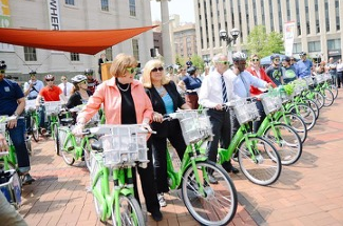 Customer service, administration, and onboarding new Link members is provided by Bike Miami Valley, a local non-profit.  RTA’s role is to maintain, rebalance, and repair the bikes.  RTA employs 2.5 FTE’s to handle those duties, with repairs done in the Wright Stop Bike Shop that RTA maintains on the ground floor of its headquarters in downtown Dayton.  The agency subsidizes Link with about $250,000 in funding per year.

In 2019, e-scooters gained popularity in cities across the country, and Ohio passed legislation empowering local jurisdictions to deploy them.  Wh

ile the City of Dayton was developing regulations to legalize e-scooters, RTA helped draft language to local regulations requiring that any permitted provider integrate with a MaaS platform of the city’s choosing (RTA has chosen to integrate with Transit app).

In a meeting with city officials and Spin RTA proposed that the transit agency provide maintenance for a shared e-scooter fleet deployment, since the agency was already providing similar services for Link.  Spin agreed and the two parties entered into a contract soon after.  Spin deployed around 150 scooters in August 2019, with another 75 added a month later.  From August 2019 through mid-January 2020, over 20,000 trips were taken on Spin’s e-scooters in Dayton, with minimal pushback from local residents.  The city bans scooters from being ridden between 9 p.m. and 7 a.m.

In a unique arrangement, Spin pays RTA to rebalance, recharge, and maintain its e-scooter fleet in Dayton (RTA does not provide a subsidy).  Spin maintains no staff in Dayton, but every few weeks a company employee travels from nearby Columbus to collect and replace broken scooters.  S 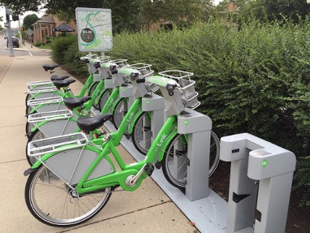 pin provides data to the City of Dayton about utilization and trip origins and destinations.

tioned away from a docked bikeshare model toward one that gives riders more flexibility with an expanded deployment of standard bicycle racks.

Link and Spin have been popular in Dayton, though they provide a small fraction of RTA’s trips (the agency provides around 30,000 trips per day, roughly equivalent to 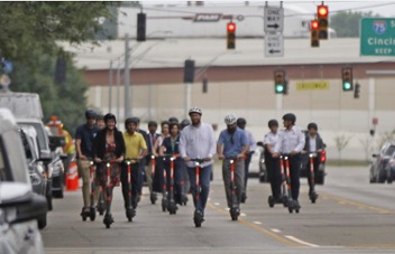 the number of Link rides in a year).  Strategically, Link and Spin services have helped RTA position itself as a multimodal MaaS provider in the Miami Valley, with integrated trip planning and ticketing available through partnerships with Masabi and Transit app.

re available in Dayton.

Looking ahead, RTA plans to integrate trip planning and payments for both Link and Spin into Transit app, which also provides mobile ticketing on RTA buses and demand response services.

naging operations of Link and Spin.  Both modes align well with RTA’s goals supporting MaaS and universal access to multimodal travel in the region.

If he could launch Link all over again, Policicchio says he would probably have RTA take on all roles of managing and maintaining Link

without requiring external partnerships, which he believes would streamline operations.  He also advises transit agencies considering e-scooter partnerships to spend time up front defining “success” with their provider partner.  In Dayton’s case, Spin considered the number of scooters deployed by 7 a.m.  to be a key success metric, while the city and RTA were more interested in shrinkage rates and maximizing utilization of available scooters.

Contract Between Spin and GDRTA

City of Dayton rules and regulations for electric micromobility 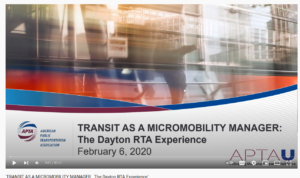