A Denver RTD Program: Enabling Payment of Transit Trips Through The Uber App

The Regional Transportation District (RTD) in Denver is poised to become the first public transit agency in the United States to sell tickets through a ride hail app. Users of the Uber app in Denver currently see public transit options alongside ride hail, and in the second quarter of   2019 they will be able to pay for a ticket through the Uber app itself. This collaboration between RTD and Uber was made possible by Masabi, a mobile ticketing company that has formal relationships with both RTD and Uber.

RTD’s collaboration with Uber and Masabi did not require the agency to pay anything directly; costs were borne by the two private companies.

In November 2017, RTD began offering RTD Mobile Tickets through a contract with Masabi.  The RTD Mobile Tickets app allows customers to purchase single trip tickets as well as daily or monthly passes and is available on both Apple and Android devices.  Masabi receives a commission of 2.25 percent for each mobile ticket sold (RTD also pays credit card processing charges).  As of February 2019, RTD has sold 1.5 million mobile tickets generating $9.4 million of revenue, equal to 8 percent of RTD’s total fare revenue in that period.

A partnership between RTD and Uber was first suggested by Masabi, which had separate partnerships with both organizations.  In August 2018, RTD and Uber discussed potentially making public transit tickets available through the Uber app, at a time when RTD was seeking to demonstrate its embrace of innovative mobility solutions.

RTD leaders expressed enthusiasm for the idea, especially because it would not cost the agency anything beyond staff time devoted to communications. All tech buildout costs would be borne by Masabi and Uber.

On January 31, 2019, RTD announced a partnership with Uber and Masabi that would integrate RTD ticketing and trip planning into the Uber app.  It marked the first time that Uber (or any ride hail company) had announced such a ticketing integration with a public transit agency.

The technological work behind the integration was undertaken by Uber and Masabi. The Masabi Justride platform’s Software Development Kit (SDK) allows public transit agencies to extend their sales channel to third party apps.  For that reason, RTD did not need an agreement with Uber to enable Masabi to provide tickets on the Uber app; a simple, no-cost amendment to the RTD-Masabi contract was sufficient.  RTD retains the right to terminate the partnership by notifying Masabi of its desire to do so.

When a person in the Denver area opens the Uber app and enters a desired destination, they will see RTD transit options alongside Uber services like UberPOOL and UberX.  Each option includes both pricing and arrival time estimates.

RTD CEO David Genova hailed the partnership, saying “our customers want their trips to be as seamless as possible, and a collaboration like this one allows them to plan for travel from end to end, including additional first mile and last mile options.”

RTD will receive aggregate information about tickets sold through the Uber app, but a data sharing agreement with Uber is necessary to obtain more nuanced information, such as the location or desired routes of people who open the Uber app and consider the transit option. As of April 2019, Uber and RTD have agreed to discuss a data sharing agreement, but no specifics have been proposed. The two parties are also negotiating a trade agreement through which Uber would promote RTD services to its subscribers and, in return, RTD would provide Uber with no-cost advertising space in its vehicles.

Other app companies are able to use RTD’s GTFS feed.  On March 11th, 2019 RTD announced an additional collaboration with Lyft, which will allow Lyft customers to see public transit alongside Lyft options when searching for a trip in the Denver region. Eventually that collaboration could evolve to include ticketing, as with Uber/Masabi.

Because these pilots are new, it is not yet possible to know outcomes.  RTD is currently in the process of determining its success metrics for the pilots.

Tonya Anderson, RTD’s Electronic Fare Operations Manager, says that discussions around data sharing revealed important differences of opinion between Uber and RTD.  “We at RTD would say that a customer who bought a transit ticket through Uber is an RTD customer because they bought our ticket.  But Uber said ‘no, that’s our customer because they’re on the Uber app,” she explained.

Anderson says if she could embark on the Uber/Masabi collaboration over again, she would establish clear success metrics and negotiate a data sharing agreement before issuing public announcements.

David Zipper, urban and regional policy program fellow with the German Marshall Fund of the United States, developed this document for APTA. 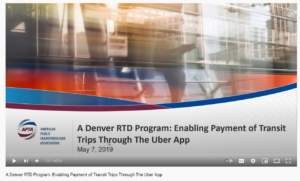